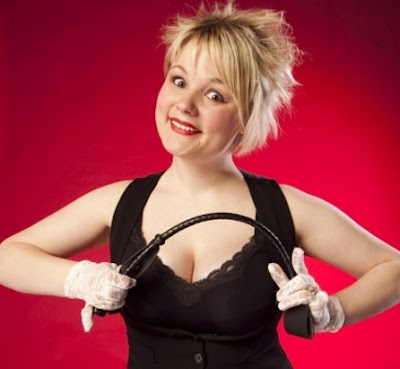 A comic exploration of political struggle, First Against the Wall is the latest cabaret show from the Green Room Award nominated Karin Muiznieks. Accompanied by her sister Emma on drums, French horn and guitar, and pianist Rowland Brache, Muiznieks sings her way through an exploration of the class system and her plans for a benign dictatorship - intended to save us from the impending robot apocalypse.

Muiznieks is an engaging and charismatic performer, and connects best with the audience when she is directly presenting her theories about feudalism and capitalism via a series of flip-chart cartoons. Some of her songs, such as 'Yard Sale' didn't seem essential to the narrative, and felt occasionally constrained by the limitations of the small Butterfly Club stage. On opening night the show also felt under-rehearsed, whicvh detracted from Muiznieks' obvious talent, ably displayed in songs such as 'Peter' (a satirical exploration of Peter Garrett's political career) and 'Randy Newman, Kiss My Butt'.

This review originally appeared in The Age on Saturday April 10

Posted by richardwatts at 12:55 pm